Welcome to All But Forgotten Oldies

Rediscover your favorite songs from the sixties and early seventies. Find those long-lost tunes you thought you had long forgotten. We maintain a searchable database of links to sound clips for over 4000 songs from 1960-1975 which can be browsed both by performing artist and by song title. Currently, over 1200 bands and artists with clips are featured - plus, we also have listings for another 3500 more acts covering the years 1940-1990. If you're not quite sure what song you are looking for, browsing through our extensive song lists is bound to help you jog your memory.

Are you bothered by some nebulous song fragment running through your head and you can't for the life of you NAME THAT TUNE?? Have you been searching garage sales for hard-to-find recordings of some obscure song for the past 20-odd years with no luck?

Since we first went online, we have helped literally thousands of people in all aspects of oldies music collecting - everything from locating out-of-print CDs to finding sheet music to naming some long-forgotten tune from half-remembered song snippets. We hope our website will help you finally track down that elusive tune you have been seeking for so long.

Number One Songs - 1950s
The 1950s was the decade that gave birth to rock and roll. The radical changes that took place in pop music during this era can be heard in the assorted mix of top pop hits of the day. Number One Songs - 1960s
The tumultuous 1960s was the era of the Beatles, the British Invasion, Motown, girl groups, surf rock, dance crazes, and the beginning of hard rock. The many changes that took place are well represented by the top charting songs of that decade. Number One Songs - 1970s
The 1970s are best remembered as the decade that gave birth to disco. Singer-songwriters, soft rock, mellow pop, nostalgia, and glam rock - plus a healthy dose of songs with a more salacious feel - also helped to define the music of this era.

Les Brown And His Orchestra

During the week of June 19, 2022, Stephen Stills sold the rights to his recordings to Iconic Artists Group, an entertainment brand management company owned by longtime Eagles manager Irving Azoff. Stills' recorded assets include his solo works along with music he created as a member of Buffalo Springfield, CSN, CSNY, Manassas, The Stills-Young Band, and various other groups. [continued...]

A History And Definition Of Oldies Music
Oldies music is alive and well and more popular than ever. It encompasses styles as diverse as doo-wop, rockabilly, R&B, and most rock and roll genres, with a generous sprinkling of blues and country. Love Is In The Air With Popular Wedding Songs
Here we have a mix of long-time favorite wedding staples plus other classic oldies love songs that are the perfect musical accompaniment to any romantic setting. The Beatles And Ed Sullivan Combined To Make History
February 9, 1964 marks the Beatles' first historic appearance on the Ed Sullivan Show which was, and remains, one of very few TV events that has yet to be matched in terms of its lasting impact on American pop culture. You Know You're A Baby Boomer
For those of us who grew up during the 1950s-1970s, here is a tongue-in-cheek look at what it is really like being a baby boomer.

Listed below are key events in music, history, and pop culture that took place on this day between 1950-1980 when oldies music ruled the airwaves. 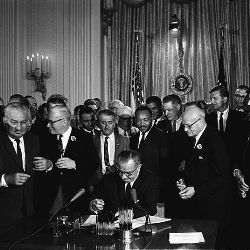 President Lyndon B. Johnson signing the 1964 Civil Rights Act as Martin Luther King, Jr., and others look on