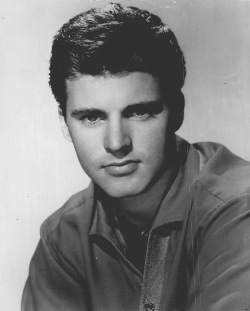 Ricky Nelson (born Eric Hilliard Nelson, May 8, 1940 - December 31, 1985) was a highly acclaimed singer, songwriter, musician, and actor. He began his career in show business at age 8 when both he and his older brother, David, joined their parents' famous radio (later TV) sitcom, "The Adventures Of Ozzie And Harriet." In 1957, he made his music debut on his parents' show with a cover of Fats Domino's "I'm Walkin'," and soon thereafter became a teen idol and a household name. During that same year, he made his chart debut with that song (along with its B-side, "A Teenager's Romance"), and he released his first album, "Ricky," which topped the Billboard 200.

Ricky Nelson's life was tragically cut short in 1985 at age 45 in a plane crash in De Kalb, Texas.

Disclosure: The following links will take you to various online merchants outside of allbutforgottenoldies.net that sell recordings and other merchandise for the performing artist featured on this page. Please note that these are referral or affiliate links from which allbutforgottenoldies.net may receive, at no additional cost to you, a commission if you should make any purchases through them.

To listen to a song clip, click any song title that has a speaker icon. This will take you to a list of links to CD and/or MP3 product pages from one or more online merchants that have sound samples.

Jump to:
Previous Artist | Next Artist